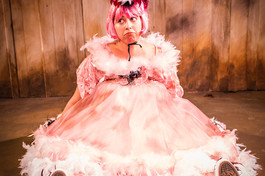 Because talking about yourself isn’t completely awkward…

Let’s see, I’m a theatre, film, and voice-actress as well as part-time writer, and full-time dork. Also a masked vigilante on weekends.

Was born in Germany, and have moved to a lot of places in my time, most recently Los Angeles, CA where I lived for 8 years until moving to Atlanta to further my film/TV career in 2018.

I have American/Swiss/French citizenship so I can work both in the states and the European Union which is tres cool.

I studied Theatre at the University of Maryland, improv at the Upright Citizens Brigade and Impro Theatre, and am a proud company member of Theatre of N.O.T.E. in Hollywood.

In my time in LA, I worked for companies such as Marvel, Disney, Dreamworks, Sony, Nintendo, Nike, (and more) doing everything from audiobooks, video games, and animation to national commercials and on-camera work.

I even played a depressed giant chicken on stage once. So there’s that.